Another Curve in the Road

Exactly 11 days after my last post, God threw another curve in the road of our life.  I never expected to find myself in the pediatric ICU with my baby boy, but that's where we ended up. 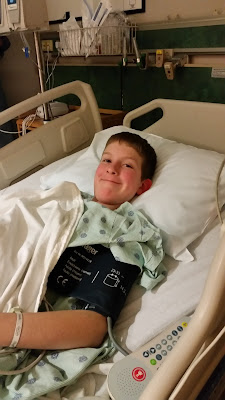 Fortunately the stay was short, just two days, but he left with a new normal - Type 1 Diabetes.  Came out of nowhere, really.  It doesn't run in our family, so we were a bit surprised that he should get this.  They say a virus can cause it to begin.  Who would have thought?

People have asked me how I knew.  Because there seems to be quite the occurrence of this nowadays, I'd like to share with you how I knew because the fact that someone had shared their story with me was lifesaving to my son.

My best friend from forever has a son who was diagnosed with T1 last May.  Over the summer we got together and she shared her journey with me.  Fortunately, it wasn't something that my overworked brain forgot.

I noticed on Saturday, the 23rd, that my son had gone to the bathroom two times within a short period of time.  This, for him, was not that unusual so I didn't think much of it at the time.  Later that night, however, I saw him get out of bed and go into the bathroom twice within about half an hour.  I had a quiet voice in my head tell me to pay attention to that.  I immediately thought of my friend's son.  I sat in bed with my kindle that night looking up the common symptoms of Type 1.

Although I have to say that he didn't come to me and tell me he was thirsty and hungry, he just kept asking for more to eat and drink.  He had told me all of the week prior how tired he was.  My response?  "Try going to bed earlier!"

It wasn't until I looked at the symptoms all together and thought about the past few weeks that I saw the pattern.  Otherwise, life is life and you tend to ignore all of the "I'm thirsty" and "I'm hungry" statements.

While he didn't have the blurred vision or tingling hands and feet, when he came downstairs on Sunday, he did look like, all of a sudden, he had lost a lot of weight.  His face looked sunken in and his arms looked very skinny.  Just like that!  Some of the kids said they had noticed on Saturday how skinny he looked, but we hadn't.

I thought back to my friend and remembered her telling me about checking her son's urine for ketones.   I knew you could go to the pharmacy and get strips so after Mass we headed to Walgreens and picked up our first bottle of urine strips.  Once home we tested him twice.  Both times he tested Moderate/High.  Yikes.  I called my friend just to go over what was going on and she told us to head to the ER with him now before he started vomiting, which would be the next thing that would begin to happen.

It wasn't long before he was being admitted to the ICU and hooked up to his insulin drip.  At that point his blood glucose level was 524.

Over the next two days we learned more about insulin, shots, glucose checks and diabetes than I ever wanted to learn.  We were sent home with a dazed look in our eyes.  It was like coming home with your first baby and thinking, "What on earth am I supposed to do with this kid to keep him alive".

It's been quite the ride these past three weeks.  There's more to be said but, I think that, for now, this is enough.  Please keep us all in your prayers as we navigate this new normal for our family.