Knowing When to Make A Change

This year with my two youngest children we are doing year three of Catholic Schoolhouse which covers the Renaissance time period through modern history.  We are doing it all at home without belonging to a co-op; mainly because there isn't a co-op around to belong to.

CSH breaks all of the information up into 24 weeks - four periods of six weeks each.  In my original planning I broke it down into four periods with seven weeks each, allowing for that extra week to catch up each quarter.

Well, we're in our third week now and I already know that this schedule is just not going to work.  Instead of just plowing ahead and forcing the issue, which is something that is my first inclination, I've decided to make a change.  This is a hard thing for me to do, but I realize, finally...after 18 years...that it just doesn't make sense to force something that isn't working.  Trust me, I know what I am talking about.  No one comes out ahead by this method.

You see, our life is such that we really need to be done with school, or at least the parts that heavily involve me, by lunchtime.  There is just too much that goes on around here in the afternoon for me to be still working with people.  That's not to say that the kids aren't doing things on their own, mind you.

What happened in the first two weeks was that I felt like we were just cramming way too much into our time slots and just flying through it so that we could be done on time.  This.is.very.stressful.

After two weeks, I was dreading school.  I was hating the pace and hating the fact that our focus was more on the checking off than it was on delving into one of my favorite time periods.  We're studying St. Ignatius, for gosh sakes, and I felt like we weren't even doing him justice.

So over the weekend I decided to take each week of CSH and make it into two.  My kids, of course, were wondering what happened to their schedule, and believe it or not there was some questioning and huffing and puffing, but I explained that I just wanted us not to be rushed and that maybe we would actually retain something if we slowed down.

This is revolutionary for me, and I'm sure I'm not alone here.  I've always wanted to do this, but just never have.  I'm such a list-checking person that slowing it down and spending more time on something just doesn't come easy to me. 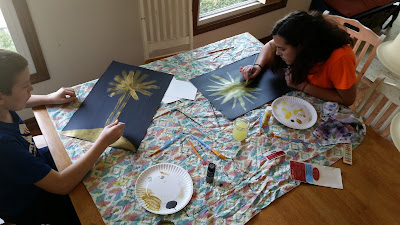 This week is our first week at the slower pace and I already like it more.  We did an art project today (another thing I'm not good at!) and it was nice and relaxed because we had the time to do it.  We went to the library yesterday to look for books on the Renaissance and I wasn't trying to rush them out the door.

Sometimes you just have to look at yourself and what you've set up and ask yourself if it is really working for everyone and then if it isn't, here's the important part, MAKE A CHANGE so that it does work. That is the beauty of homeschooling.  Just because the curriculum is laid out one way, if it doesn't work for you, change it so it does.

At this new pace, we just might not make it up to modern times and finish the curriculum, but I'm okay with that now.  Here's to slowing it down and having fun learning what needs to be learned!