Judas, Pilate and the Crowning with Thorns

While he was still speaking, Judas came, one of the Twelve, and with him a great crowd with swords and clubs, from the chief priests and the elders of the people. Now the betrayer had given them a sign, saying, "The one I shall kiss is the man; seize him." And he came up to Jesus at once and said, "Hail, Master!" And he kissed him. Matthew 26:47-49 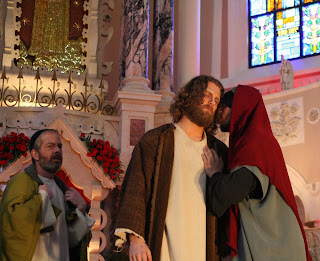 And when those who were about him saw what would follow, they said, "Lord, shall we strike with the sword?" And one of them struck the slave of the high priest and cut off his right ear. But Jesus said, "No more of this!" And he touched his ear and healed him. Luke 22:49-51 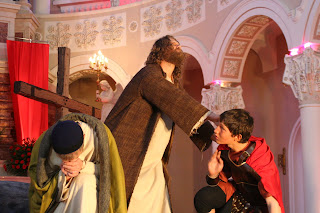 Now Jesus stood before the governor; and the governor asked him, "Are you the King of the Jews?" Jesus said to him, "You have said so." But when he was accused by the chief priests and elders he made no answer. Then Pilate said to him, "Do you not hear how many things they testify against you?" But he gave him no answer not even to a single charge; so that the governor wondered greatly. Matthew 27:11-14 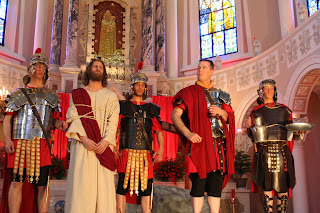 So when Pilate saw that he was gaining nothing, but rather that a riot was beginning, he took water and washed his hands before the crowd, saying, "I am innocent of this righteous man's blood; see to it yourselves." Matthew 27:24-25 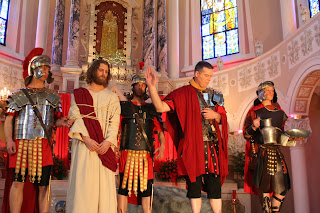 Then the soldiers of the governor took Jesus into the praetorium and they gathered the whole battalion before him. And they stripped him and put a scarlet robe upon him, and plaiting a crown of thorns they put it on his head, and put a reed in his right hand. And kneeling before him they mocked him, saying, "Hail, King of the Jews!" And they spat upon him, and took the reed and struck him on the head. And when they had mocked him, they stripped him of the robe, and put his own clothes on him, and led him away to crucify him. Matthew 27:27-31 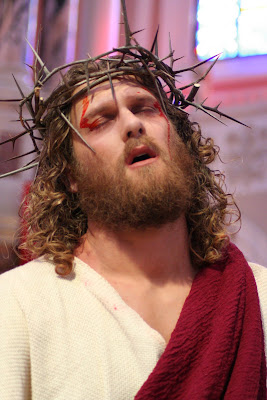