The Knights of the Holy Eucharist 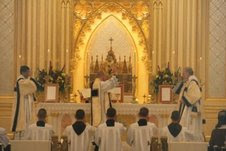 After we returned home from our vacation in July from the Shrine of the Most Blessed Sacrament in Hanceville, AL, I received a submission to my website whose timing I found most interesting. It seems that a young lady who is helping to promote the Knights of the Holy Eucharist down in Hanceville "happened" upon my website, introduced the Knights to me and asked if I would be willing to help promote them on my site.

"Did I meet you last week?" I asked her? No, it seems that we were never introduced, but I remember seeing her and her family down there, so we both got a kick out of the "coincidence". So now, two months later, I'm finally getting around to running the article she and her sister wrote about the Knights. It is kind of lengthy for a blog, so I think I'll run it in two parts, along with some pictures she sent. I do plan on putting up a permanent page on my website, just haven't found the time yet!

Hope you enjoy the article and feel free to pass the info along to any young men who you think might be interested. It is an awesome place! 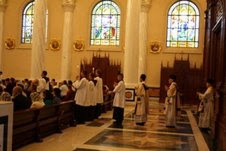 Catholic Homeschooling: Training for Six Knights of the Holy Eucharist
by Maureen McEneany with Paula McEneany
Like the Eternal Word Television Network, the Knights of the Holy Eucharist community was the inspiration of Mother Angelica. In the summer of 1998, with the Shrine of the Most Blessed Sacrament under construction, Mother decided to start a men’s community dedicated to the permanent needs of the Shrine.
Consecrated to Our Lady and loyal to the Holy Father, the Knights of the Holy Eucharist seek to follow Christ through a communal life dedicated to His service. The primary focus of this service is the fostering of reverent devotion to Our Lord in the Most Blessed Sacrament and the assistance and protection of the Poor Clare Nuns of Perpetual Adoration. It is the Knights' privilege to serve the Shrine and Our Lady of the Angels Monastery in various capacities. These include assisting pilgrims; serving Masses and Holy Hours; providing transportation for guests and hospitality for visiting clergy, brothers, and seminarians; and maintaining the buildings and the grounds.
The Knights make public commitments but take private vows. They don’t follow a Franciscan rule, but they do have a Franciscan spirituality. Brother David, the Brother Guardian (superior), commented, “Mother Angelica’s spirituality—Franciscan spirituality in a nutshell—is to follow the Gospels with perfect joy.”
Since June 29, 2007, the community has been a branch of the Heralds of the Gospel, an international Association of Pontifical Right, whose mission is evangelization. The Heralds strive to live the command “Be perfect as your heavenly Father is perfect,” both interiorly and exteriorly, as a reflection of God’s perfection. Headquartered in Brazil, but now in 72 countries, the Heralds are made up of consecrated men (3,000); consecrated women (2,000); and Companions—people living in the world (25,000). “We became a branch of the Heralds primarily because joining them was a continuation of our charism. The Heralds strive to include in their spirituality the ‘best’ of what’s found in all the Church-approved spiritualities, e.g., Benedictine, Franciscan, Dominican,” reflected Brother David. Becoming affiliated with the Heralds has allowed the Knights to tap into the vast experience and wisdom of the Heralds, especially of the founder, Msgr. João Clá Dias, the Heralds’ General President.
Six of the ten Knights were educated at home: Brother Laurence, Brother Philip, Brother Juan, Brother Francesco, Brother Gregory, and Brother Michael. Recently I spoke with them about their life, education, and vocations.
In 2007, Brothers Michael and Francesco began their studies at Holy Apostles College and Seminary, Cromwell, Connecticut, to be followed the next year by Brother Gregory (and Brother Fidelis). All of these have made honor-roll grades. This fall, the four have been joined by Brothers Laurence and Juan. It is the Knights’ intention to open a young men’s academy near the Shrine. The Knight-priests will teach at the academy and assist with the needs of both the Shrine and the Diocese of Birmingham.
Brothers Philip and Laurence, besides being brothers in the community, are also blood brothers. Brother Laurence discovered the community through Brother Philip, who had joined several years previously. Brother Philip’s attraction to the community was gradual; he slowly realized he had a calling.
Brother Gregory found the Knights through friends in his Catholic homeschool group who joined Mother Angelica’s nuns. The Knights’ consecrated life and their fidelity to the Church drew him.
Within the community, the Knights have varied duties. (For example, Brother Philip has been designing the Knights’ new chapel, which is currently under construction.) To all of them, I think, could be applied the label “jack of all trades”!
What do these young consecrated men see as the benefits of home education?