Here is how it all worked out: 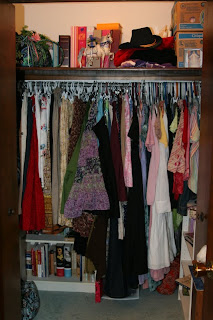 The closet was the first to get attacked.  Items that had been sitting in there for the past 1 1/2 years were put into boxes and stored in the basement.  I mean really, if you haven't touched one of the many Breyer's horses in that amount of time, putting them in a box is an okay thing!!

Then clothing was sorted through and junk was tossed.  The end result was a much neater and less cluttered closet.  The younger girls' closet didn't need any emptying, but it did get a bunch of new stuff put into it.  The shelf on the top of the closet is pretty deep, so much of what was hidden under beds or under the shelving unit got put up there.  The biggest addition to their closet was their dresser.  They needed to get it out of the middle of the room, but it is still a necessary piece of furniture.  Since those two girls don't have much in the way of hanging clothes (and won't for at least three more years, according to an older sister :), they decided it was okay to put the dresser in the closet.

The white dresser that was originally part of the island did not really hold anything necessary to daily life, so that was put in the basement (in a part that doesn't usually get water!) and the items on the bookshelves were put on the cleaned out bookshelves in the older girls' closet.

As you can see, they now have a wonderfully open room.  In fact, they've been gathering in there the past few days just to enjoy all the space. 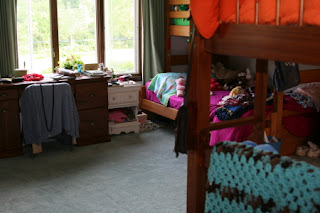 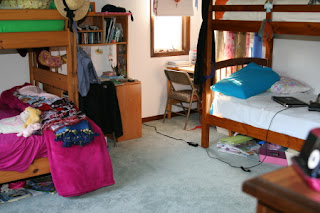 There is still a lot of furniture in that room, and there's been talk of moving some of that around, but for now we are all enjoying the wonderful openness to their room!

The best thing about this whole project is that it wasn't my idea, I didn't have to beg them or threaten them to do it, and I didn't have to do any of the work!  What a great job they did all by themselves!  I guess that's how it is when you're motivated.  Of course, now I know what they are really capable of....