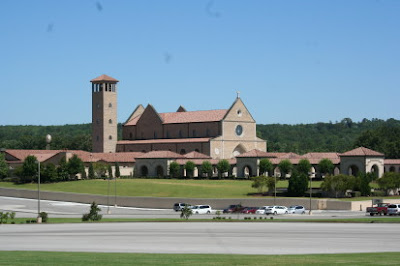 Returning from a nice vacation is both a happy time and a sad time. Happy to be back and into a somewhat normal and predictable routine (if there is such a thing) but sad to have left the beautiful surroundings of Hanceville, AL. I know it doesn't sound like much, but if you've ever been to the Shrine of the Most Blessed Sacrament, you know what I mean. It dawned on me today that what I like about that place (besides the beauty, peace and the fact that you can feel God's presence there) is that the people who attend Mass there and the priests that say Mass are there because they love the Lord and are devoted to Him in the Blessed Sacrament, and to His most blessed Mother. They aren't there because they have to be; they aren't there for the community or the nuns or the social aspect; they are there to show reverence and respect to the Lord.

Anyhow, for those who are interested, here is a brief synopsis of our trip in pictures and words. There will be a few more posts this week about specific topics that came up while we were down there, but here goes:

One of the first things we got to do was meet Brother Michael, who has been with the Knights of the Holy Eucharist for the past five years. He is currently in his second year of Seminary. He gave us a great tour of the Brothers' house and property. Here he is with a new statue of the Infant Jesus that was made for them. 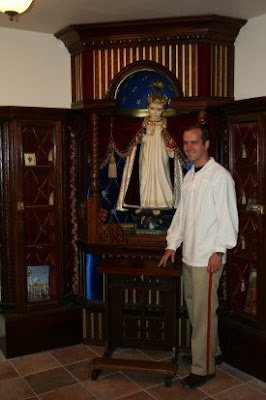 Next, he showed us the chapel that the Brothers designed and are building themselves. This picture does not do it justice at all, but it is going to be very beautiful. 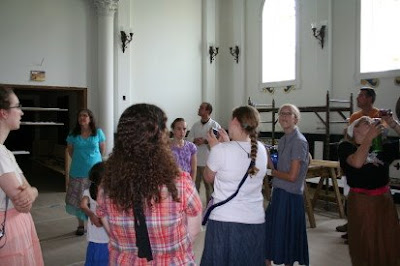 Then he took us behind the scenes of the Lourdes Grotto that was just built at the Shrine. Here you can see by my daughter's expression that it was hot and very smelly back there! 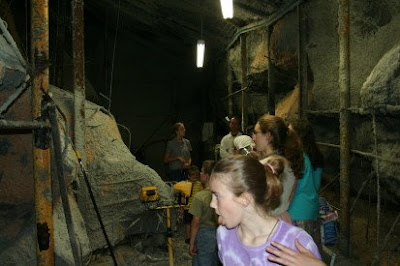 Here is the gaggle (plus two friends) with St. Bernadette (she's the pale one that is kneeling :) 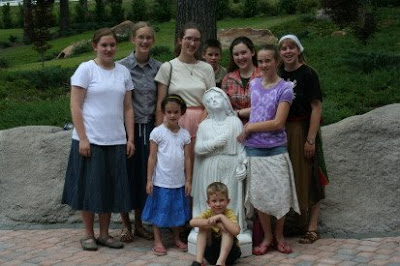 Finally, Brother Michael showed us how skilled he was at riding a donkey. The tour ended here because the lightning was getting a bit too close for comfort! 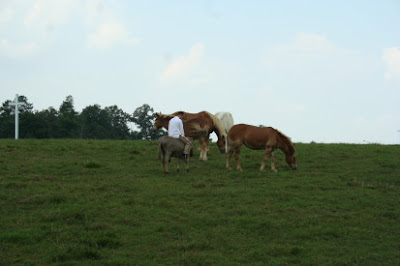 Here are some of the kids with St. Joan of Arc in the gift shop. 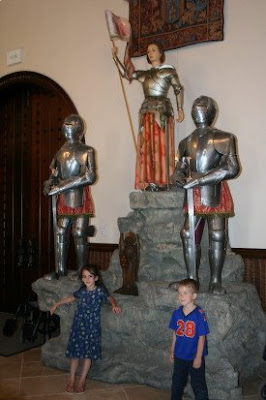 A preview of a possible Christmas picture: 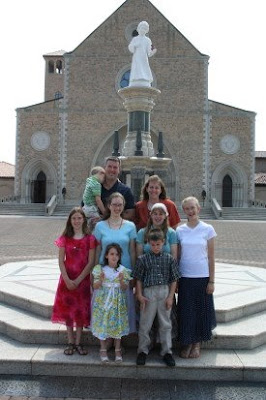 We also got to take a tour of the EWTN studios with Brother John Paul. It was very cool to hear all of the neat stories that they've heard from people who watch their programs. Brother told us a story about a person who was dying of cancer. One day this person rolled over and landed on the remote, thus turning on the TV. What they saw was someone on EWTN looking into the camera and saying "You have to go to confession!" I think that would wake me up! 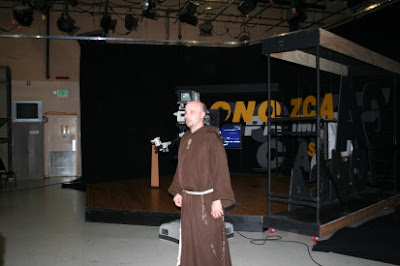 We also stayed for the EWTN Live show that night when Bishop Perry and the Canons Regular of St. John Cantius (all from Chicago) were interviewed by Fr. Joseph. It was a neat experience. 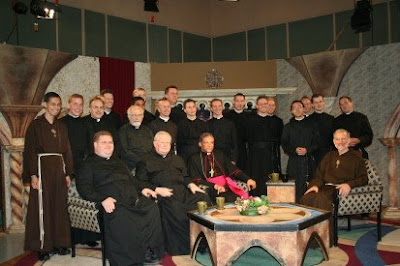 And lest you think we tortured our children all week with religious things, we also went swimming and biking, played with friends - both old and new, ate a lot of ice cream and did some thrift store shopping to round out a wonderful week full of many blessings. Thanks for reminiscing with me!