With three days left of the 2009-10 hunting season, my husband finally got a deer. Since he typed up his story to share with hunting friends, I asked if I could reprint it here. Of course he said yes, so here is my DH's 1st deer story (with my commentary in this nice italicized print...kind of like the whispering you hear at a golf tournament!)

Over the past two weeks we noticed that deer travel out of the neighbor's woods behind our home, through our yard and cross the road to the harvested corn field for evening grazing. This usually happens between 5:00PM and 5:10PM and there have been as few as 5 but more often a dozen crossing the yard at one time. I began to call it the evening parade. When we first noticed this, (Ms 13 yo) would get all excited and yell why don't you just run out there and shoot one. Laura would ask why don't you? My response was, "Sure, I'll just dash out there and shoot a deer. It is not that simple." (As an added tidbit, earlier in the week, the neighbor-lady called her husband up at work - both of them hunters - to tell him about a big buck that was in their back yard. I asked my husband if she got it. His response to me was, "You don't just walk out of your house and shoot a deer." "Why not" I still wondered, so naive am I to the subtle nuances of deer hunting!) So here is how it happened. Not the typical deer camp story that one would read in a hunting magazine.

Success yes, a hunt, that could be questioned. It was more like a spontaneous reaction. Yesterday afternoon I stopped work and went upstairs at 4:45 to make a cup of coffee. At 4:55 I told (Mr 4 yo) that he was on look out for the 5PM deer parade. As I was telling him to look out the back window, two deer walk into the yard. All I said was that they are right on time. I set my cup down (thus about to break a very important rule of hunting: a hunter is only allowed to smell like a female deer in heat or dirt, NOT COFFEE!), didn't say anything to anyone mostly because I was a bit grouchy (slightly understated :), I walked out to the garage put my coat on and picked up my bow. As I was walking out of the garage I decided to stop and take my slippers off and slip my boots on (I wondered about that), skip the gloves I'm not going to b out there long.

Not quite dressed in proper hunting attire (that is for sure. After reading and studying hunting for the past 1 1/2 years, he had the nerve to break one of the foremost rules of the sport - never go anywhere to hunt unless you look exactly like a tree! I suppose he looked mostly like a tree, except for his legs and hands and face which looked very much like a person), I proceeded to walk to the front corner of the house (the front corner of the house? What about that nice hunting blind that's sitting in the backyard??? You know, the one that looks like a tree?). As I looked around the corner sure enough they were gone. No surprise. Since it was warm out, relatively speaking, I decide to wait and see if the 5:10 parade was scheduled for today, and it was. Two deer walked out into the yard, stopped and looked in my direction but didn't notice me (can't imagine how they didn't notice that half person standing next to the house!). Then the larger of the two walked farther out into the yard and stopped and looked again. I estimated it was 32- 35 yards out. I thought, "This is a long shot for me but if I don't shoot now in about 2 minutes it will be too dark to see it." Nothing ventured nothing gained, so I took a deep breath, quickly drew back, I could barely find my peep site on the string in the dark, set the 35 yard pin on its vital area and squeezed the release. At the sound of the twang it bolted. I thought, well at least I got a shot off this year, I'll consider that progress from last year. I was certain that I under shot and missed (seriously, here, don't let his modesty fool you, he really is a good shot! After all, he's killed all the animals so far on the Wii Cabela's Hunting game - even that pesky mountain lion!)

As I was turning to walk back to the garage I looked back at where the deer had been standing and noticed a large dark smudge in the snow. That was not there before, so I walked out to investigate. I noticed a large blood trail back into the trees. That was a good shot! I walked backed up to the garage, it was 5:15 by then, Laura met me at the door, curious as to what happened. She and (Ms 13 yo) were watching out the bedroom window and were not quite sure if I shot it or it just ran away. I told them I would be late for dinner because I needed to go track my deer. With the assistance of (Mr 9 yo), my neighbor, who is a very experienced hunter (with a very wise wife!! but more on the wife connection later), and a pair of flash lights we found him - a six point buck, laying in the neighbor's woods about 80 yards away from where I shot him. (Mr 9 yo's) job was to hold the flash lights while our neighbor demonstrated for me how to field dress a deer. By 7:00PM it was gutted and ready for a photo shoot.

So why did I tell you all of this (thanks for hanging in there. This is where it gets really good!). First, because this was my first successful deer hunt and second, I guess sometimes it pays to listen to your daughter and wife's idea of hunting (Can we get a replay on that last sentence???): Just wait inside and when you see one, run outside and shoot it (what wisdom. I told you it makes perfect sense.) So that is what I did. Success!

(I'd like to add another lesson we learned here that ties in to this post: always be prepared and knowledgeable, but definitely be ready to be flexible!)

It's me again and in all seriousness, I'm very proud of my hubby. He's waited a long time for this moment. I mean, really, the most important thing isn't how he got it, or who instructed him, but that he did get the deer. Look at the smiles on their faces.... 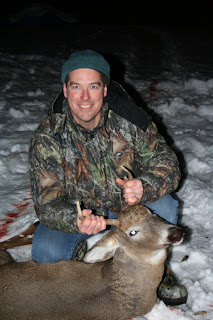