I believe it began over the weekend when we watched "Ms. Potter", a wonderful movie about Beatrix Potter.  The movie showed a lot about her drawing and painting, so it was after that that we noticed the two youngest pulling out the paper and paints.

Tuesday night I was having some ladies over when Mr 6 yo came up with a small easel we have and put his painting on it.  On the easel was a small piece of paper with a "10" on it.  "What's this?" I asked.  He told me he was putting his painting up for sale for $.10 in case one of the ladies wanted to buy it.

Well, seeing as how his grandmother was one of the ladies, she, as any grandmother would do,  bought his painting...and gave him a $.05 tip!  Ah, what a little bit of "incentive" will do for someone.

After school work was done today he got out his painting supplies and set himself up outside. 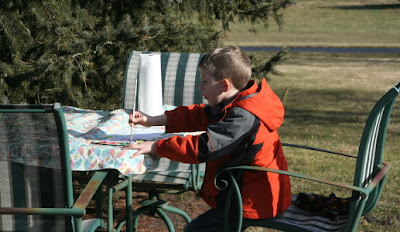 We were a bit curious why he was outside (beside the fact that it was January 11th and 50 degrees) but the best we can figure was that he was going back to the movie that showed Ms. Potter drawing by the lakeside.  It was so cute to watch him out there going to town on his painting.  His lips were moving, but the door was shut so we don't know if he was singing or just talking to himself.  Either way he finished up and came in with a painting of a barn.

We were supposed to have more people over tonight so he wanted to be ready for another possible sale. 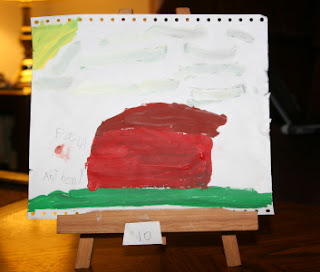 Unfortunately, our weekly formation group got cancelled for tonight, so he'll have to wait until next week.  If you're interested in purchasing his artwork, just drop me a comment, I'm sure he'd be thrilled (and encouraged :)!

Who knows, with a bit of persistence, he might just be another Beatrix Potter.