Paul Bunyan and the Effects of Gluttony

In the entire state of Wisconsin, there are two places that house a wonderful, all-you-can-eat restaurant named "Paul Bunyan". 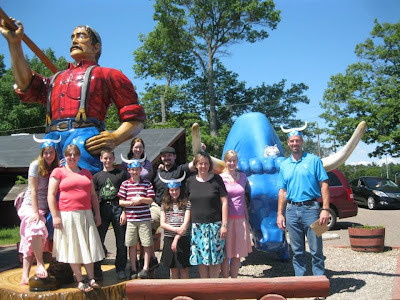 It is set up in the fashion of an old logging camp with long tables and benches (or at least they used to have benches, as, much to our disappointment, we were sitting on chairs) to sit on.  They serve your meal family style, and while they serve lunch and dinner, our favorite is the logger's breakfast.  I can't stress this enough when I say we'd been looking forward to this breakfast for months.

Not, mind you, because of the all-you-can eat pancakes, biscuits and gravy, sausages, ham, bacon and yummy potatoes.  No, none of those.  It was those heavenly donuts that have been gnawing at our stomach's for lo the past six months.  It's not just us, either.  People come from far and wide to get at those donuts.

The day finally came for us to load up and head on over to Paul's.  We stood in line, finally got to our table and the moment arrived:  the first plate of donuts was there.  MMMM, just as good as we remembered (since it had been about 8 years since the last time we'd had them!).

The kids all sat at one table so I wasn't able to keep an eye on what was going down.  After we were all done, Mr 8 yo came over to our table looking like this: 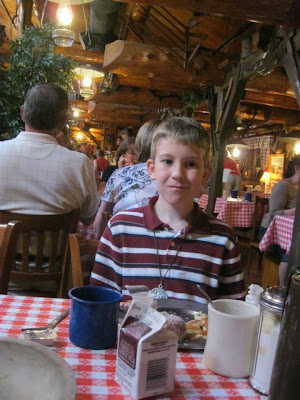 He sat on his dad's lap for awhile and then started moaning that his tummy hurt and that he NEVER wanted to come here again.  After a few minutes of this I suggested that maybe my husband should take him to the bathroom.  I got a bit nervous as I saw his body heave a bit as he was walking down the middle aisle of the very full restaurant.  Fortunately, he made it at least to the doorway of the men's room before it all came up.

At first the kids were blaming it on all of the food he ate.  Once they gave me the rundown I still was skeptical since, when he wants to, that kid can pack a lot of food in.  Then they told me about the two cartons of chocolate milk that he downed and I knew I had found the culprit.  You don't drink that much milk on a full stomach when you never drink milk!!  Plain and simple - this kid has always drunk almond milk, very rarely cow's milk, so putting that much milk on an already full stomach is bound to make anyone lurch.

Oh well, the good news is that afterwards he felt perfectly fine and isn't objecting to going back again some time in the future.  Fortunately, the closest Paul's is still about 4 hours away, otherwise we might all look like his big, blue ox!